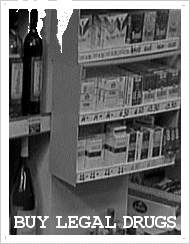 Those in power relentlessly spread their untruths because money is their God.

Legal drugs take far more lives than illegal drugs. If governments cared about people they would review their attitude to drug use and promote a balanced, unprejudiced view of everything we put into our bodies. But is there any money in it for them if they do?

(Summary put simply) - Use of illicit drugs such as heroin, cocaine, marijuana, glue and speed is dangerous and addictive. However, legal drugs such as alcohol, tobacco and doctor's medicines are just as harmful over a long period and, because so many people use them, take far more lives and cost the health service far more money. However, the amount spent on campaigns, education and warnings about legal drugs is only about 1 per cent of that spent on illegal drugs! The main reason is probably that governments make a lot of money in taxes on legal drugs, but make nothing on illegal ones (There are some interesting statistics below). So what can be done? Perhaps start a petition calling for governments to take a more balanced approach to everything we put into our bodies, ie food, medicine, drink, drugs and fast food?

What is drug use?

This refers to legal as well as illicit drugs. Tobacco, alcohol and prescribed medications are the biggest killers. Costs to the health service and the economy run into billions and millions of people suffer because of these drugs. Yet the money spent on prevention is minuscule compared with that spent on illicit substances such as heroin, cocaine, marijuana, inhalants and stimulants.

Why is there so much drug use?

The drug use culture is firmly embedded in most societies. Many drugs have been around for centuries. Wide availability and peer pressure makes it almost inevitable that everyone will use drugs at some time.

The wide acceptance of alcohol, prescribed medication and tobacco is the main factor because they are seen as "normal" things that adults do. It is almost inevitable that younger people will want to emulate adults. The rebellion instinct of teenagers, peer pressure, boredom and fantasy also leads to experimentation with illegal substances.

Is drug use a big problem?

An estimated 3% of the global population, or 185 million people consume illicit drugs annually. 30% of the global population consume tobacco. About 50% drink alcohol regularly. About 200,000 people die every year because of illicit drugs. About 5 million annual deaths are caused by tobacco. "Alcohol causes as much death and disability as measles and malaria, and far more years of life lost to death and disability than tobacco or illegal drugs. There is sufficient evidence to indicate that alcohol is a significant threat to world health" (World Health Organization).

1 person in 13 is dependent on alcohol in Britain, twice as many as are hooked on all other forms of drugs, including prescription drugs (1 in 26). Yet just over £1 million is spent on alcohol prevention and treatment compared with £91.45 million on drugs while the drinks trade spends £227 million a year to advertise its products (2001). This pattern is repeated in other countries.

What is being done by governments about drug use?

"After the significant growth of drug abuse in the past half century, the spread of drugs in the world has slowed down," said Antonio Maria Costa in the UN Report 2004. "Especially encouraging is the substantial decrease of deaths caused by drug abuse in Western Europe during the past few years - almost 20 per cent between 2000 and 2002," Mr Costa added. The report recognises the 1.3 billion tobacco smokers but they are not mentioned in the EU action plan targets of 26 October 2004, which are:

What should be done about drug use?

Illicit drug abuse and the related crimes are undoubtably serious problems and the successes in prevention are welcome. But the facts and figures above show an incredible lack of concern over alcohol and tobacco. Money would seem to be the reason why. Large corporations control the production and export of tobacco and alcohol. Large corporations also control governments. Though they benefit countries with taxation and jobs, the cost in lives and illness far outweighs this.

The World Health Organization fully supports the international Framework Convention on Tobacco Control. This provides countries with a roadmap for enacting strong, science-based policies that can save lives and improve health. Further pressure must be put on all governments, particularly the USA, to implement the FCTC instead of opposing it. A similar co-ordinated strategy could be put in place for alcohol. Governments have to stop supporting the minority. Surveys show the great majority of the public want governments to highlight the risks of drinking alcohol.

The ultimate high with no hangover or adverse side effects and where overdose is impossible is freely available to everyone. Why not give Prem Rawat and his gift of Knowledge a try?

Social/political changes will never fully work unless we all change as well, but here are some useful links regarding Drug Use. (Some links may be out of date)

Useful Articles about Drug Use

Actions Being Taken re Drug Use

Petition About Alcohol and Drug Use

(Summary put simply) - This petition urges governments to do more to teach the public about everything we put into our bodies:- that is food, fast food, drink, medicine and drugs. The dangers of these things are not properly understood. Some legal drugs such as alcohol and tobacco kill far more people than illegal drugs such as heroin or cocaine. We ask, therefore, that governments take a more balanced view. They should spend as much money on research into alcohol as that spent on illegal drugs. They should put labels on bottles and cans showing the units of alcohol. They should ban advertising of alcohol just as they banned it for smoking. They should have national campaigns, aimed at old people as well as young people, to teach a sensible understanding of how alcohol, tobacco, food, fast food, drinks, medicines and drugs of all kinds affect different people in different ways

Alcohol kills more people and adversely affects more lives than illegal drugs. We therefore call on all governments to:

Sample letter about Drug Use

I urge you to support all measures, policies and proposals to greatly reduce the consumption of alcohol and the harm it causes.

Alcohol has strong associations with crime, anti-social behaviour and domestic violence as well as health problems which cost the country millions every year. The amount spent on research, education and moderation is minuscule, however, when compared with that spent on illegal drugs, even though far more lives are lost through alcohol.

Surveys show that most people believe the government needs to raise the profile of the dangers of alcohol to at least that of tobacco and illicit drugs. Successive governments are seen to be soft and bowing to the pressures of the alcohol industry rather than responding to public concerns. It seems ridiculous to me that the overall economic cost of alcohol-related problems is far greater than taxes raised from the brewers. Is this because politicians are getting large back-handers from the alcohol industry? Is it because half the population is sloshed? Whatever the reason, the government looks ridiculous to sober people. But please do not just tell me that is nonsense, show me it is nonsense by doing the right thing and showing the public that you seriously want to tackle the alcohol problem.

One immediate measure to take is to require labels on cans and bottles showing the units of alcohol, daily limits and the danger to health. Another simple step is to ban advertising especially that connected with healthy sport and with the young.

These measures will only be properly understood, however, with a co-ordinated strategy of education aimed at everyone. The young will never change as long as their elders retain outdated attitudes regarding alcohol. Education should include understanding of all things we put in our bodies, ie food, medicines and drugs. A small amount of drink can be socially beneficial, the variety of tastes can be exquisite, but alcohol should be treated as the drug it is, with research into the limits that vary from person to person. I think it is essential that its combination with diet, body type, personality and lifestyle is scientifically understood. At the moment it is a matter of belief rather than fact.

We are all familiar with the person who "knows their limit" but really doesn't. Millions of such people cause untold damage, but still insist that they know their limit. They are overdosing on a drug but do not realise it because getting drunk is socially acceptable to half the population. Education about this is vital. Independent research and education is needed as soon as possible. It is very easy to see where the money can come from to do this, so please urge your government to stop shilly-shallying, respond to public concerns and make alcohol problems a thing of the past.